Upcoming FLSA Changes & Shrinking of the White Collar Exemption: Now is the Time to Reassess Compliance and Update Your Policies

Upcoming FLSA Changes & Shrinking of the White Collar Exemption: Now is the Time to Reassess Compliance and Update Your Policies 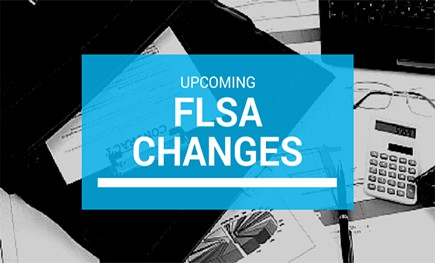 In response to a directive from President Obama, the Department of Labor (DOL) has been working since Spring 2014 to revise the white collar exemption under the Fair Labor Standards Act (FLSA). The revisions are expected to significantly increase the minimum salary test and the primary duties test.

What does the FLSA provide for and what is the white collar exemption?

The FLSA is a federal statute that establishes minimum wage, overtime pay, recordkeeping and child labor standards. The statute requires that most employees be paid, at least, the federal minimum wage and overtime pay at one and one-half the regular rate of pay for all hours worked over 40.

The statute also provides an exemption from both minimum wage and overtime pay for employees who are employed as executive, administrative, professional, outside sales, computer or highly compensated employees. Collectively, these are known as the “white collar exemptions.” To qualify for these exemptions an employee must meet the salary basis test, which requires they be paid at least $455 per week ($23,660 per year). Additionally, the employee’s job must meet the “primary duties” test:

Why are the regulations being amended?

The DOL is specifically acting in response to a 2014 directive from President Obama that instructed the DOL to “modernize and streamline the existing overtime regulations.” In particular, Obama indicated that the current FLSA exemptions for overtime requirements had not kept up with inflation and modern economic realities. The regulations have only been updated two times in the past 40 years with the most recent update occurring under the Bush Administration in 2004.

What changes are anticipated?

While the DOL has not made anything public, the most significant changes anticipated are (1) an increase in the salary threshold in the range of $40,000-$55,000 and (2) a quantitative primary duty test that, similar to California’s state law, will require an employee spend more than 50% of his/her time on tasks deemed exempt.

What should an employer do?

Employers should start reassessing their FLSA compliance now. While this is true for all industries, it is particularly pertinent for employers in the restaurant or healthcare industries, both of which the DOL recently identified as top FLSA violators.

At a minimum, employers should:

Many employers assume that because they pay an employee more than $23,660 and have an employment agreement in place identifying the employee as exempt, the employer will avoid FLSA liability for misclassifications. This is not the case; while the DOL will consider the agreement, it is only one factor among many that come into play.

What’s the status of the proposed amended regulations?

The proposed amendments are currently being reviewed by the Office of Management and Budget’s Office of Information and Regulatory Affairs (OIRA), which received them from the DOL this past May. The proposed new regulations will likely be made public within the next few weeks. At that point, there will be a public comment period of at least 30 days.

When will the amended regulations go in effect?

The proposed changes will likely not be effective until Fall 2015. Following the public comment period, the DOL will draft a final regulation in response to the public comments. OIRA will then conduct a final review to approve the text of the regulation and publish it in the Federal Register. The period for a review of the draft is limited to 90 days with a possible single 30-day extension. There is no minimum time for review, with the typical turnaround being 60 days. The period may also be delayed further if affected parties file suits to challenge the revisions.