A Patriotic Partnership: The Construction Industry and the Military

A Patriotic Partnership: The Construction Industry and the Military 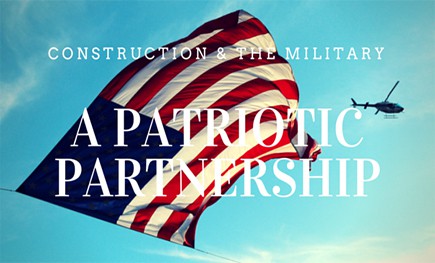 Richmond-based Hourigan Construction has begun work on Phase One of the Marine Security Force Regiment headquarters and compound at the Naval Weapons Station in Yorktown, VA. The new facilities will include a regimental headquarters building, a motor transportation facility, bachelor enlisted quarters, a supply facility and an armory. Upon the completion of Phase One, expected this summer, construction for Phase Two will begin. Phase Two will include a training facility for antiterrorism training.

The $100 million construction project is being heralded as energy efficient and is expected to increase the quality of training that is offered to military personnel who protect naval assets throughout the world. While the project is important to national security, it is also a recent example of the positive relationships that continue to exist between the United States military and the construction industry.

Between Memorial Day and the Fourth of July, we honor the fallen and the veterans of wars for their sacrifices in protecting our freedoms. We have concerts, parades, fireworks, t-shirts and memorabilia to remind us that the members of the armed forces are deserving of our respect. In the midst of the solemn observations and celebrations of national victories, we all have the opportunity, whether individually or collectively, to demonstrate the patriotism that is the embodiment of the men and women of the United States military. And since many former military find second careers in the construction industry, that same sense of patriotism is evident in the planning, design and building of structures throughout America. The construction industry has stepped up to the plate in a major way to show support for the sacrifices of the brave men and women of the United States military.

It is no secret that ex-military personnel are often successful at transferring their military skillsets to lucrative and sustainable careers in construction. The military builds bridges, buildings and roads. Construction companies benefit from those skills and offer lucrative careers. Many job search services for ex-military market their services to the construction industry. Two such services are Veterans Build America and Helmets to Hardhats.

While the public relations aspect is certainly an incentive for an employer to hire former military personnel, the reality is that the discipline learned in the military is a practical skill to have on any construction site. The ability to make tactical decisions on the battlefield translates easily to analyzing and mitigating potential risks on a construction project. Preparing architectural drawings, plans and supporting documents for the Post Traumatic Stress Disorder/Mental Health Research Addition at the Charleston, South Carolina VA Medical Center, completed in 2014, is not substantially different than the planning for construction of the brand new Inova Children’s Hospital which will open in January 2016. The decision-making process of how to allocate human resources in 2013 during the recovery efforts of Typhoon Haiyan in Southeast Asia is akin to making employment decisions for the construction of the Skyland Town Center, currently underway in southeast DC.

The landscape of the DC metropolitan area is a constant reminder of the interconnectedness between the United States military and the construction industry. For every monument, school, hospital, residential or commercial structure that exists throughout the region, construction companies were involved in the bidding, the design and the construction of the structures. According to the Associated Builders and Contractors, DC Metro Chapter, numerous contractors count disabled veterans among not only the employed ranks, but also as the owners of their respective companies. Employing former military is not only patriotic, but makes good business sense.

This post was originally published in Bean, Kinney & Korman’s Construction & Land Use Newsletter in June 2015.