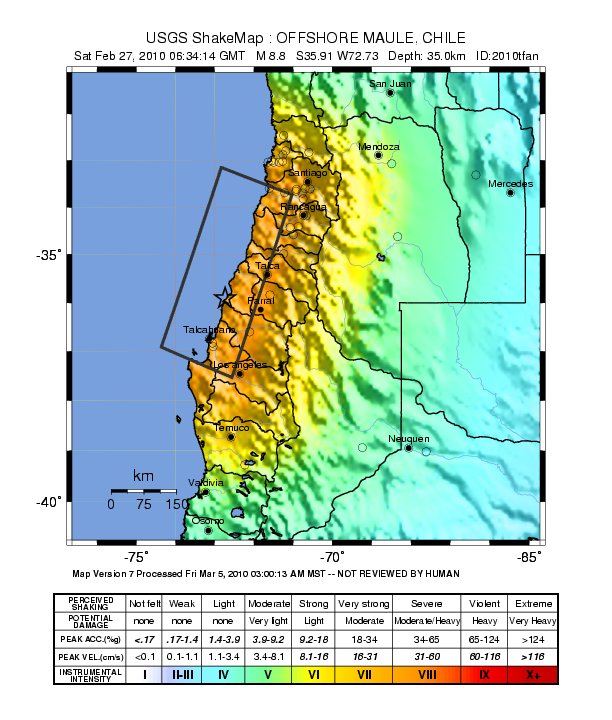 In the last several months, both Haiti and Chile have been rocked by significant earthquakes. The difference between the tremendous devastation and loss of life in Haiti and the far lower impact in Chile, despite a much more serious earthquake, is at least in part the direct result of building codes and construction practices.

The earthquake in Haiti registered magnitude 7.0 and resulted in an estimated 200,000 people killed. The Chilean earthquake registered magnitude 8.8, translating to 500 to 900 times more energy released than the earthquake in Haiti. The death toll estimates in Chile are still preliminary and changing both up and down, but the current estimate appears to be 528 although it has fluctuated up and down from as high as 800.

Why the dramatic discrepancy? Read more below the break …

Part of the answer is that the Chilean earthquake was deeper underground with an epicenter further from population centers. But a significant factor is the difference in building codes, building materials, inspections and design. Building codes and enforcement are described as weak to non-existent in Haiti. By contrast, Chile has incorporated significant elements of seismic protection into its building codes for decades and has continually updated its building codes.

The Chilean code requires lateral stiffening of buildings. Guillermo Franco, a senior research engineer at AIR Worldwide, Inc., is quoted in ENR as saying, “They have built vertical walls all along the whole height of the building, using between 2% and 4% of the floor area devoted to these walls to give the buildings enough resistance to lateral shaking.” The industrial design code is further described in ENR has requiring a compulsory design review and inspection by independent parties.

At times, negotiations over language of building codes can become a tug of war between claims of excessive regulation and cost versus the need to save lives or property. Certainly, factoring in costs associated with regulatory effort is a sensible step. It is hard to argue against modernizing codes for seismic protection, especially in areas that face significant risk of such events such as Chile or California. The incremental additional cost of the investment in Chile has translated into a tremendous number of lives saved, businesses preserved, and a path towards far more rapid recovery from a very serious seismic event.