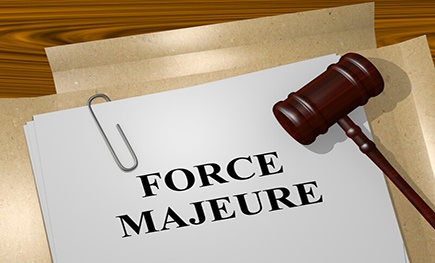 My most recent article provided a short explanation of force majeure provisions in commercial leases and how landlords and tenants will need to carefully review the language to determine if any obligations by either party can be excused due to the worldwide coronavirus (COVID-19) pandemic. But as is typical with this crisis, facts on the ground are changing every day and now many states and localities are enforcing the closing of businesses and refrain from public gatherings. In particular, restaurants and bars have been closed. Based on the feedback I have received, I thought it would be helpful to explore a few more related issues.

Force majeure provisions usually expressly exclude rental obligations from the types of obligations for which a tenant can be excused because of truly unforeseen events outside of their control. It is critical to closely review the language, but local state courts typically enforce the clear and unambiguous terms of a contract. Therefore, as a matter of a law, the exclusion of rent from the force majeure clause may effectively prevent the tenant from avoiding that obligation under the lease. The office or retail tenant who is not prohibited by law from operating may have a harder argument to make, but depending on the circumstances of this unfolding crisis and the exact language of the provision, there could be room for negotiations with the landlord or a claim under a business interruption insurance policy.

However, for the restaurant and bar tenant with a narrowly defined permitted use clause, one contract defense that could apply to this situation is the doctrine of impossibility. Very similar to the frustration of purpose defense, this defense acts to excuse performance by a party if an event occurs whose non-occurrence was a basic assumption of the agreement and if it makes performance impossible or impractical. Under Virginia law, the party relying on the defense must establish (1) the unexpected occurrence of an intervening act, (2) such occurrence was of such a character that its non-occurrence was a basic assumption of the agreement of the parties, and (3) that occurrence made performance impracticable. A critical factor is whether the party agreed in the lease to assume the risk of performance, whether possible or not. Again, it depends on the precise language in the lease.

Like Virginia, the doctrine of impossibility in the District of Columbia requires the following three factors:

Arguably, if the language of the lease effectively requires that the tenant accept the risk of paying rent even in the time of a force majeure event, a court might hold that the tenant accepted the risk of paying rent even when an impossibility event occurred. Though the landlord’s argument likely becomes more difficult when the government rules that the only use permitted under the lease is no longer allowed.

As with reviewing force majeure clauses, commercial landlords and tenants should have their counsel closely review the use and operating provisions in their existing leases and make sure these issues are addressed in future leases.

Related to the force majeure analysis is the question of allocation of risk. Both landlords and tenants may argue that, depending on the precise nature of the commercial property and the type of business operated by the tenant, the other party is in the better position to foresee this type of business risk and properly obtain insurance as protection. Business interruption insurance could be the answer, but like all types of insurance, there are limitations. The policy will contain exclusions that need to be understood. Importantly, note that some more recent business interruption insurance policies include a “virus” exclusion, and the precise language of that exclusion, or any other applicable exclusion, will need to be reviewed considering the unfolding facts of the ongoing pandemic.

The last major national crisis where businesses were shuttered by government rule was after the attacks of September 11, 2001. As a result, many businesses were able to recoup millions in losses from these types of policies. One good example would be where an airport concessions operator requested coverage under an insurance policy that provided coverage for losses due to government action that prohibited access to airports because of damage at another location. The insurance company denied the claim, arguing that the closings of the airport were not due to damage from the attacks but because of a fear of future terrorist attacks. The courts declined the insurance company’s request to throw out the case, making clear that the policy in question did cover losses resulting from closure by the civic authorities. Many similar cases will certainly result from the coronavirus pandemic.

In fact, cases have already been filed seeking coverage for COVID-19 caused losses under business interruption insurance policies. The first known case was filed this week in Louisiana by a French Quarter restaurant tenant seeking a declaration. The question relates to whether the policy language that extends coverage “in the event of the businesses closure by order of Civil Authority” applies in these circumstances. As in all cases to come, the language in the policy and the facts of the crisis will be the controlling factors.