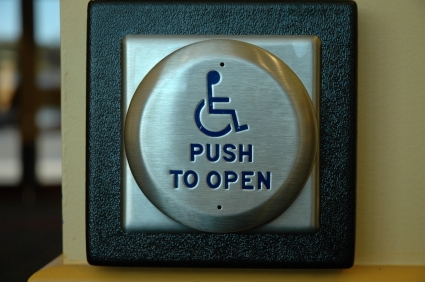 The U.S. Department of Justice (DOJ) recently published new regulations in the Federal Register on September 15, with the final rules taking effect March 15, 2011. Compliance with the 2010 Standards for Accessible Design is permitted as of September 15, 2010, but not required until March 15, 2012. These new regulations relate to the implementation of Title II and Title III of the Americans With Disabilities Act and apply to public entities as well as a number of types of facilities owned/operated by private entities relating to public accommodations in private facilities. DOJ is issuing these rules in order to adopt “enforceable” accessibility standards under the Americans with Disabilities Act of 1990 (ADA) that are consistent with the minimum guidelines and requirements issued by the Architectural and Transportation Barriers Compliance Board.

that fall into one of 12 categories listed in the ADA, such as restaurants, movie theaters, schools, day care facilities, recreation facilities, and doctors’ offices) and requires newly constructed or

altered commercial facilities (privately owned, nonresidential facilities such as factories, warehouses, or office buildings) to comply with the ADA Standards. The new rules include a general “safe harbor” under which elements in these types of facilities that were built or altered in compliance with the 1991 Standards would not be required to be brought into compliance with the 2010 Standards until the elements were subject to a planned alteration. A similar “safe harbor” also applies to elements associated with the “path of travel” to an altered area. The official fact sheet outlining the changes to Title II can be found here and the fact sheet outlining the changes to Title III can be found here.

So what do you need to know about these new regulations? Well, first of all, these new regulations should help simplify things because they were intended to be in congruity with the International Building Code/most uniform statewide building codes, to reduce conflicts per the old requirements, where you had various federal and state requirements that were different. Also, remember that the “safe harbor” provisions should be taken into account when scoping new construction or upgrades at facilities. Additionally, because compliance with the 2010 Standards for Accessible Design is permitted as of September 15, 2010, but not required until March 15, 2012, it looks like there will be a window where you will have a choice of which standards to implement, which should also be kept track of. And, of course if you have any special excpetions going through the public processes right now, pay attention to what you agree to.