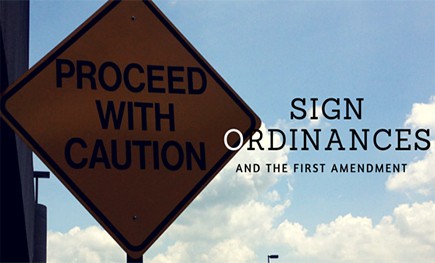 On June 18, 2015, the United States Supreme Court ruled in Reed v. Town of Gilbert that an Arizona town’s sign ordinance unconstitutionally regulated the content of speech posted on signs within the town. Like so many modern localities, the Town of Gilbert had adopted a sign ordinance regulating signage within the town, including the total number of certain signs that could be displayed, their size and how long such signs could be displayed. The town based these restrictions upon the type of sign to be displayed and created categories of signs subject to different regulations. In particular, the town created different regulations for ideological signs, political signs and temporary signs. The town based these differences in its police power considerations for the town’s aesthetics and traffic safety, and claimed it did not disagree with any particular message on a given sign. Under these sign regulations, the town cited the Good News Community Church on several occasions for violating the temporary sign regulations, because the church had not removed them in time and failed to include all the information required on a temporary sign. The church, in response, sued the town, claiming the ordinance was an unconstitutional content-based restriction of its freedom of speech.

The Supreme Court agreed. The court found that the ordinance, on its face, was based upon the content expressed on a given sign, because it created different signage regulations entirely depending on the message to be conveyed. As such, the law was presumptively unconstitutional. It would be up to the town to show that the ordinance survived “strict scrutiny,” a legal standard requiring the government to prove its regulations are narrowly tailored to serve a compelling government interest. The court found the town failed to meet this standard. Benign motives like local aesthetics and traffic safety would not suffice where those motives applied equally to signs the town did not restrict as heavily as temporary signs. The court noted the town had a number of content-neutral alternatives, such as restricting size, building materials, lighting, parts and might even be able to forbid their placement on public property. If applied evenly across all types of signs, regardless of their message, the ordinance could probably survive.

Reed v. Town of Gilbert is a reminder that the First Amendment to the United States Constitution remains a powerful tool in land use and zoning law cases. Many Virginia localities have adopted sign ordinances that could be subject to scrutiny if they fail to apply their regulations evenly across all signs, or fail to have a strong reason to create such differences. As the Supreme Court has indicated, local aesthetics and traffic safety simply will not be enough to save a content-based restriction on speech.