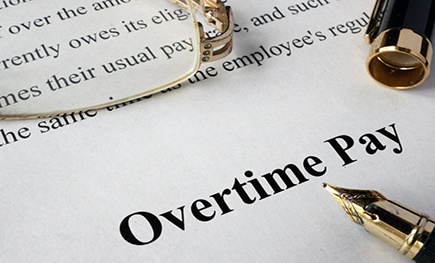 On March 7, 2019, the U.S. Department of Labor (DOL) issued proposed rules that would update the salary threshold for the Fair Labor Standard Act’s (FLSA) so-called “white collar” or “EAP” exemptions from overtime. The importance of this issue for employers is tied to the fact that an employee must be paid on a salary basis at or above the DOL’s specified minimum weekly salary level in order to be exempt from the FLSA’s overtime pay requirements.

Currently, employees paid a weekly salary below $455 per week ($23,660 per year) are deemed non-exempt and must be paid overtime for all hours worked over 40 per week.

The DOL has also proposed other changes to the FLSA’s overtime rules to:

What Remains the Same

The DOL’s proposal does not call for automatic adjustments to the white collar and HCE salary thresholds. Nor does the DOL propose to change any of the standard duties tests used to determine exempt status for executive, administrative, and professional employees based on the kinds of work they do.

What Impact is Anticipated

The DOL expects that by 2020, more than one million currently exempt employees who earn more than the current salary level of $455 per week but less than the proposed salary level of $679 are likely to become eligible for overtime. The DOL also predicts that an additional two million white collar workers who are non-exempt because they do not satisfy the EAP duties tests and currently earn above the current salary threshold but below the proposed salary threshold of $679 would have their “overtime-eligible” status strengthened because such employees would fail both the salary level and duties tests for exempt status.

Why the DOL is Making these Proposed Rule Changes

These much-anticipated rule changes are a by-product of the DOL’s previous attempt at rulemaking in 2016 under the Obama administration that would have raised the weekly salary level for exempt status to $913 per week ($47,476 per year). Before the rulemaking went into effect, however, it attracted a legal challenge that ended in a federal district court enjoining the DOL from implementing and enforcing the higher salary level.

What Employers Can Expect Moving Forward

The new proposed overtime rule will remain open for public comment for sixty days after it is published in the Federal Register. Because it was written with the benefit of extensive input received by the DOL, from six different in-person listening sessions held around the country, and from more than 200,000 public comments in response to a 2017 Request for Information, employers can anticipate a quicker turnaround time from the DOL than in 2016 when these issues were last taken up.

To prepare for the 2016 rulemaking, many employers already undertook work force audits to determine which of their employees qualified as white collar exempt from overtime pay under the previous rule making. Some have even implemented one of the options, such as raising salaries to meet the 2016 proposed salary level or paying a combination of fixed salary and overtime, to achieve compliance with the rule that never became effective. For those employers who have not yet begun the planning process or want to revisit previous employee pay policies, there is still time.