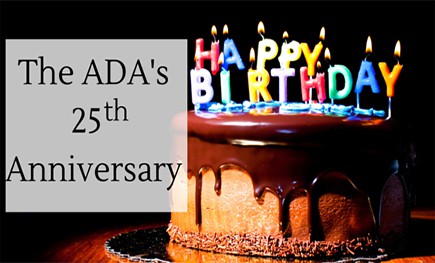 July 26, 2015 marked the twenty-fifth anniversary of The Americans with Disabilities Act (“ADA”), which created comprehensive federal protections for individuals with disabilities in all areas of public life, including the workplace, providing equal access to the same employment opportunities and benefits available to persons without disabilities. In signing the law into effect twenty-five years ago, President George H.W. Bush noted:

With today’s signing of the landmark Americans [with] Disabilities Act, every man, woman and child with a disability can now pass through once-closed doors into a bright era of equality, freedom and independence.

This past week, President Obama, addressing a gathering at the White House, declared:

Thanks to the ADA, the places that comprise our shared American life – schools, workplaces, movie theaters, courthouses, buses, baseball stadiums, national parks – they truly belong to everyone. Millions of Americans with disabilities have had the chance to develop their talents and make their unique contributions to the world. And thanks to them, America is stronger and more vibrant; it is a better country because of the ADA. That’s what this law has achieved.

How has the ADA impacted the American workplace, and what will be its legacy moving forward? These are questions that are still being contemplated twenty five years after passage of the law. The ADA was passed by Congress, in part, for the purpose of eradicating the stereotype that disabled persons cannot perform in the workplace in the same manner as non-disabled employees. The ADA prohibits an employer with fifteen or more employees from discriminating against qualified individuals with a disability, i.e., those employees or applicants for employment with a disability who can perform the essential functions of the job with or without a reasonable accommodation.

The term “disability” has taken on a new and expanded meaning under recently implemented amendments to the ADA. The ADA Amendments Act of 2008 (“ADAAA”), which became effective four years ago, has occasioned some significant changes in federal disability discrimination law under the ADA. That Congress moved to amend the ADA after it had been in effect for nearly two decades undoubtedly reflected deeply held feelings by many of its members and the general public that the U.S. Supreme Court had unreasonably narrowed the broad scope of protection originally intended by Congress to be afforded by the ADA. With the ADAAA, Congress rejected the reasoning of the Supreme Court and sought to restore the comprehensive national mandate and broad coverage it originally intended under the ADA.

The ADAAA retained the ADA’s definition of a “disability,” but provides that the term “shall be construed in favor of broad coverage of individuals” to the maximum extent permitted by the ADA. In this expanded context, even an impairment that is episodic or in remission will be considered a disability if, when active, it would substantially limit a major life activity. Similarly, the ADAAA and implementing regulations altered the definition of the term “substantially limits” in favor of expansive, rather than restrictive, disability coverage.

So far, expanded disability discrimination coverage appears to be the order of the day under the ADAAA. Federal courts considering the statutory and regulatory changes have all, more or less, adopted a broader reading of what constitutes a disability, with the effect being that plaintiffs with conditions that had previously been denied coverage and dismissed under the ADA are now able to reach the merits of their claims. These outcomes are consistent with the EEOC’s expectation that there would be an “increase in the number of . . . charges and law suits filed . . .” under the ADAAA, as plaintiffs’ lawyers who previously might not have filed an ADA law suit due to the Supreme Court’s “cramped reading” of the term “disability” will be more inclined to do so now, with the statute’s broader coverage. It seems likely that this trend will continue, with an increase in litigation over issues such as: the essential functions of the job in question, the interactive process for reasonable accommodations and whether a requested accommodation presents an undue hardship to the employer.