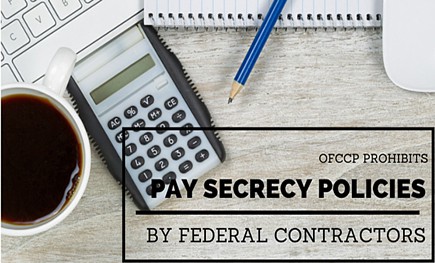 Federal contractors, take notice: did you know that it is now illegal as a federal contractor to prevent your employees from discussing their compensation? The Department of Labor’s recent ruling may significantly impact your business and necessitate changes to your policies and practices. Continue reading to determine whether your business will be affected and how.

The Department of Labor’s Office of Federal Contract Compliance Programs (“OFCCP”) claims there is a “culture of secrecy” that has prevented federal contract workers from finding out that they are earning less than what their counterparts are earning for the same work in time to act on it. In the interest of eliminating this secrecy and facilitating pay transparency, effective January 11, 2016, federal contractors and sub-contractors are prohibited from discharging or otherwise discriminating against their employees or job applicants for discussing, disclosing or inquiring about compensation. The rationale behind the OFCCP’s Final Rule, which implements President Obama’s 2014 Executive Order 13665, is that prohibiting pay secrecy policies promotes pay transparency which helps “make the federal contractor workforce more efficient . . .” and “level[s] the playing field for women and people of color. . . .”

Who Does the Rule Affect?

The Final Rule is applicable to any business entity that:

What Exactly Does this Rule Cover?

The Final Rule protects a job applicant’s or employee’s inquiries, discussions and disclosures regarding his or her own compensation or the compensation of other job applicants or employees. In other words, your employees have the right to publicly discuss their wages and benefits. The protection would typically apply where the applicant or employee obtains compensation information through ordinary means, such as through a conversation with a co-worker or via an anonymous note from a co-worker. Compensation is defined broadly under the Final Rule to include salary, wages, overtime pay, shift differentials, bonuses, commissions, vacation and holiday pay, allowances, insurance and other benefits, stock options and awards, profit sharing and retirement.

What Must Affected Employers Do?

The Final rule requires federal contractors, among other things, to incorporate a prescribed non-discrimination provision into their existing employee manuals or handbooks and disseminate the nondiscrimination provision to employees and to job applicants. In light of these significant changes, a top-to-bottom review of your employment-related policies and practices may be needed in order to avoid running afoul of the OFCCP’s new pay transparency requirements.