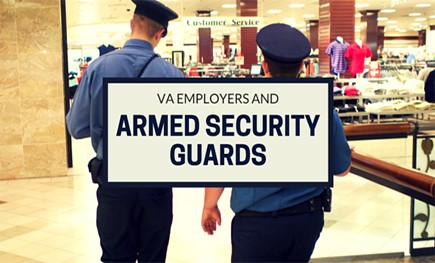 Workplace violence has become a growing concern for businesses across the country. In Virginia, employers of all sizes are actively considering, many for the first time, whether it would be prudent to have extra security personnel on hand and wondering whether they can be held liable for actions taken by security guards on their premises. The good news for employers in the Commonwealth is that such liability can be mitigated with the right policies in place.

No Employer Liability for the Actions of Independent, Third-Party Security Personnel

Generally an employer is not liable for physical harm caused to another by an act or omission of an independent contractor or its servants. While there are a few narrow exceptions to the general rule — for work that is unlawful, a nuisance or is inherently dangerous unless special precautions are taken — it is well-settled law in Virginia that an employer is not liable for actions taken by an armed security guard that is an independent contractor of the employer. The Supreme Court of Virginia concluded in Broaddus v. Standard Drug Co., Inc. that a drug store could not be held liable to the plaintiff, a drug store patron who was shot by a hired independent security guard as the patron was fleeing the scene, after an altercation with an off-duty police officer. The Court reasoned that the security guard was: 1) an independent contractor of the drug store, not an employee; and 2) the security guard’s work was not the type that would typically produce injury absent special precautions.

Therefore, employers should not be liable for the actions taken by third-party security guards, as long as they clearly establish and maintain an independent contractor relationship by:

Virginia employers are insulated from personal injury claims by their employees when the injury arises out of and in the course of the employee’s employment. The Virginia Workers’ Compensation Act (VWCA) is the employee’s sole and exclusive remedy against the employer.

Notwithstanding the VWCA’s blanket coverage, an employer still has a duty to protect or warn an employee against criminal conduct of a third party, but only in a few very narrowly defined situations. In Virginia, whether an employer has satisfied the duty to protect or warn depends on whether the risk of employee injury was actually known to the employer or was somehow reasonably foreseeable. Acts of criminal behavior by third persons have not been found to be reasonably foreseeable by Virginia courts. Nor has Virginia enacted a law to shield employees from workplace violence or to require employers to implement workplace violence protection programs. Thus employers should not be liable to an employee injured by workplace violence, unless the situation was one where the specter of violence was obvious beforehand – e.g., an ongoing domestic dispute, coupled with a history of domestic violence and a current threat of violence against an employee.

Nevertheless, it may be prudent for Virginia employers to consider implementing enhanced workplace security policies and practices.

There are some further security measures to consider, if the building in which your business is located is accessible to the general public. Many commercial buildings or offices have a lobby in which the receptionist can be accessed by anyone walking in, which allows for the possibility of a disgruntled customer or client to commit a violent act. The following measures may decrease the chance of this happening:

Workplace violence has unfortunately become increasingly common. However, with a few straightforward security measures, employers can decrease the chance that violence will occur at their place of business, and thereby limit liability in the case of an incident.